We have a long history of stamping, cleaning and handling electrical parts it has been a cornerstone for us.
Cleanliness of the stamped parts is critical for many downstream processes, for example, soldering “wettability”.

Contaminants and lube or cleaning agent residue can impair the downstream processes.
Using the correct cleansing agent and process for the material and plating of the stamped part is critical as some agents can cause delayed corrosion.
Many electrical components are stamped using a water emulsion lubrication that evaporates also called “vanishing lube”.

Metal particles are especially critical as they could cause an electrical system to short circuit.
Reducing the possibility of metal particles in the cutting section of the die shall be a design goal in order to avoid thin material cuts and or overlaps.
Cutting insufficient material widths could potentially produce shaved metal pieces that may or may not be attached to the part.
“Give off particles” or “swarf” is a term used for this type of contamination.

Particles like lint, fiber or cardboard are usually caused by the wrong packaging and must be avoided as well. 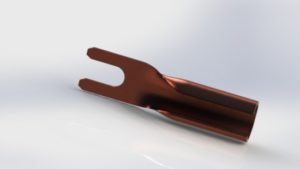